Best trumpet high note of all time? Might have been played by John Madrid, arguably one of the greatest trumpeters of all time, based on his versatility and work history (http://en.wikipedia.org/wiki/John_Madrid). I worked with John when we lived in Hawaii, in big bands, combos and shows. The high note? We worked Icecapades, the last show I did before leaving the Islands. It was a workhorse situation, playing along with pre-recorded tapes, but challenging musically and physically, many shows in only a few days. The last show, when most of us were feeling the strain and relieved to be at the end of the run, John absolutely nailed the highest note I have ever heard on trumpet. Trumpeters striving to develop a high register pretty much cut it off if they are able to develop a "double C," the concert (or sounding) B-flat two octaves and a seventh above middle C. And those able to play that note strongly and consistently are few and far between.

John had consistently demonstrated prowess and consistancy well above that range, but he outdid himself on this occasion. The last note of the last show, a fairly long held-out note for emphasis at the show's end, John played (get ready...) a TRIPLE D! That's fully a ninth above the vaunted double C. Not only did he play it, and loudly, he held it out several seconds after the tape ended and the conductor cut us off. Normally, playing in that register has the possibility of cutting off the blood flow to the brain from the internal pressure require to achieve that, and players have been known to pass out from playing not even as high as a double C. So I turned around, fully expecting to see John falling off his chair from lack of oxygen. Instead, I was treated to the usual jovial John, his trumpet resting on his knee, and smiling like the cat who just ate the canary.

Around ten years later, John and I were touring together with Frank Sinatra. I asked John if he remembered that event, and he replied that of course he did. I asked him why he held the note as long as he did, and he replied, "It was the first one I ever played, and I didn't want to let it go." 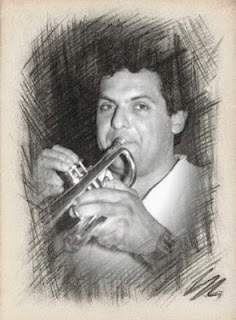 It wasn't a fluke with John. When he worked with Wayne Newton, Wayne would feature John on a jazz solo, and John would play chorus after chorus, staying in the "super" register above double C. But that wasn't the extent of his talent; he could play equally well in the low- and mid-registers, with a big, warm, beautiful tone, or execute a funky, bluesy plunger solo. But most of all, John was a warm, big-hearted person who could be a good friend. He's missed by those of us who knew him. He always seemed to be giving, but as the end neared, when he was ill, we could feel the energy flowing back the other way. It was sad to see him declining, but he left a legacy that will always be talked about and highly regarded. RIP, Johnny Madrid, 1948-1990, trumpeter and human being extroidinaire.
Posted by jazzbone at 2:04 PM 3 comments: