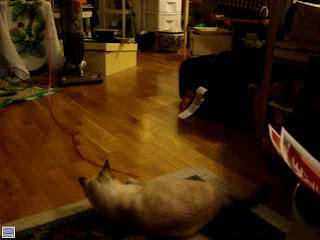 Posted by jazzbone at 8:41 PM No comments:

Momi was found and rescued by a friend of a friend, who had too many pets already and put her up for adoption. We met her and decided to bring her home. Since we knew nothing of her history, we took her to the vet that her rescuer recommended. He judged her to be between six and nine months old. She had an eye and nasal infection, so he gave her antibiotics, which we administered until the infection cleared up. We then went through the routine of checking for parasites (none), innoculations, spaying, claw-manicure, etc. Of course we had to re-group for owning a kitty, buying litter and a box, food and bowls, water dispenser, and, of course, toys.

Momi has turned out to be a beautiful creature with a wonderful layed-back personality, and follows us around the house like a devoted dog. She is a joy to have around, and a great companion.
We've since adopted a second orphan, a male we named Kona Leo, "His Voice," for his constant chatting and conversation and his loud purr. He's my baby, and loves for me to pet him. He sleeps at my feet, even when I'm napping. He'll crawl into the crook of my arm, flop over on his back, and let me rub his tummy for long periods at a time.
I started a jazz blog, decided it was too much work to keep up two, and dropped both. Now I'm writing again, and picked this one to continue; hence the jazz stories under the unusual name.
Posted by jazzbone at 8:26 PM No comments: